Thank you for your patience while we retrieve your images.

Camogli is one of the most renowned villages on the Rivera del Levante and is situated on the west coast of the promontory of Portofino. The city name origins are unclear; for many it comes from the Genoa dialect “Cà a mogee” (a bunch of houses), referring to the tall houses leaning on each other. For others “Cà de mogee” (houses of the wives) referring to the wives that use to take care of the village when their men were out on the sea.

The medieval centre is developed mainly around a small port, usually busy with tourist boats, the so-called wood “gozzi”, and by the fishermen boats used daily for fishing. The houses on the seafront in Garibaldi Street, recently restored, show facades painted according to “fresco” or “trompe-l’oeil” techniques reproducing green balconies and shutters.

During the winter swells, the waves hit the walls of the Church of Santa Maria Assunta and the chipped tower of the Dragone Castle. The tower was used to defend Camogli from the pirates. This peculiar church gives to the magic of this village a secret sweetness of the cold maritime days.
Copyright © Photography by R.N. Sheap. All rights reserved. 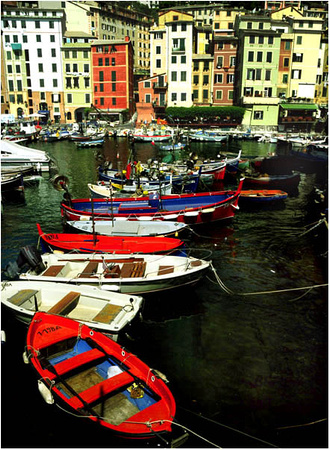